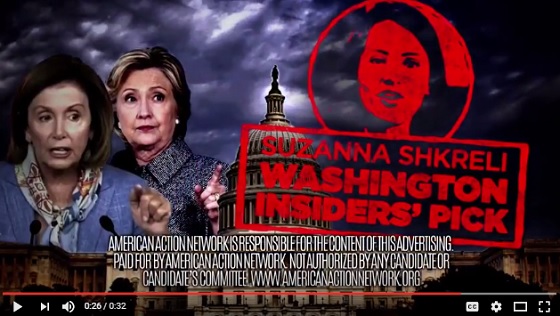 “Nothing shouts ‘rubber stamp’ quite as loud as being Washington’s handpicked candidate, yet Suzanna Shkreli is thrilled to fit the mold,” said Ruth Guerra, AAN spokeswoman. “While Michigan families continue to see premiums skyrocket under Obamacare, Suzanna Shkreli was elated the law passed. Michigan’s middle-class needs a conservative leader like Mike Bishop to keep Washington in check, not an out-of-touch liberal like Suzanna Shkreli to rubberstamp the failed policies of Nancy Pelosi and Hillary Clinton.”

The ad will air on broadcast and cable TV and online in the Detroit and Lansing media markets beginning Wednesday, October 26, as part of AAN’s $700,000 independent expenditure campaign in MI-08. American Action Network (501c4) and its sister super PAC, Congressional Leadership Fund, have announced general election spending of over $40 million in 32 districts nationwide.

ANNCR: Why did Washington insiders handpick Suzanna Shkreli for Congress?

Because they know she’ll rubberstamp their liberal agenda in Washington.

Shkreli said she was “thrilled” Obamacare passed, even though it sent premiums skyrocketing for Michigan families

Michigan’s middle-class needs a check and balance on bad ideas from Washington.

Not another partisan hack.