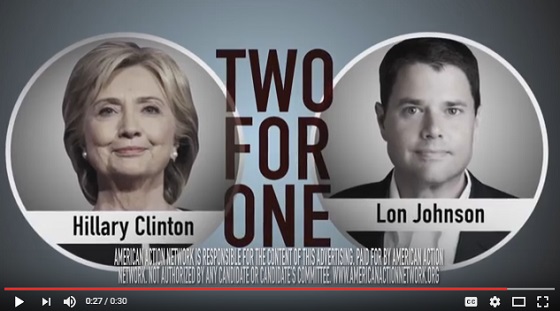 AAN Launches “Two For One” Ad Against Liberal Lon Johnson

WASHINGTON – – The American Action Network (@AAN) today released the ad “Two For One” against liberal Lon Johnson in Michigan’s 1st congressional district race. The ad spotlights how Lon Johnson and Hillary Clinton are one and the same on self-serving political games and Obamacare.

The ad will air on broadcast and cable TV and online in the Traverse City and Marquette media markets beginning Tuesday, October 25 as part of AAN’s $650,000 independent expenditure campaign in MI-01. American Action Network (501c4) and its sister super PAC, Congressional Leadership Fund, have announced general election spending of over $40 million in 32 districts nationwide.

Which candidate has previously been called a carpetbagger when running for political office?

Which candidate has taken a fortune from special interests and Washington insiders?

Which candidate wants to keep Obamacare?

Answer: Both. Clinton and Johnson. Two for one.