WASHINGTON – The American Action Network (@AAN) is launching a targeted, six-figure digital advertising campaign ahead of the U.S. House of Representatives’ vote on the American Health Care Act. This latest campaign targets 29 congressional districts nationwide. Through video, display ads and landing pages, AAN urges constituents to call their representative to keep their promise to repeal and replace the Affordable Care Act with the American Health Care Act.

“As conservatives, this is the moment we have been fighting for over the past eight years. It’s time to pass President Trump and Speaker Ryan’s conservative health care plan that will provide access to quality, affordable health care for all,” said Corry Bliss, AAN Executive Director. “Conservatives are on the brink of passing historic health care reforms, this final push urges constituents to call on their member of Congress to support the American Health Care Act and deliver on their promise of better coverage and more choices at lower costs.”

The digital campaign is the latest in AAN’s ongoing issue advocacy campaign to repeal and replace Obamacare, which now totals over $10 million in advertising in more than 75 congressional districts nationwide. 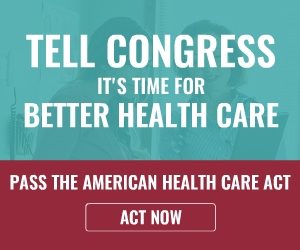