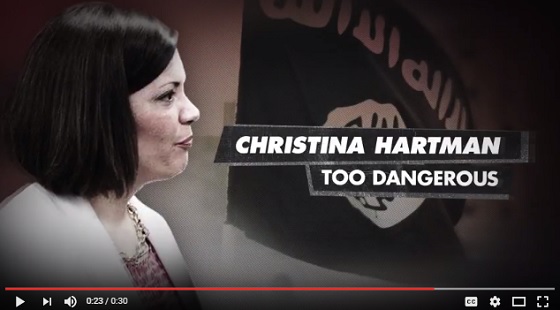 AAN Launches Ad “Only Takes One” Against Christina Hartman

The ad will air on Harrisburg-Lancaster broadcast and cable TV beginning Friday, October 28, as part of AAN’s $700,000 independent expenditure campaign in PA-16. A 15-second version will run on digital platforms. Additionally, AAN’s sister organization Congressional Leadership Fund is investing over $100,000 in direct mail and GOTV efforts in the race. AAN and CLF have announced total general election spending to date of over $40 million in 32 districts nationwide.

ANNCR: It only takes one.

One terrorist hiding amongst Syrian refugees can have tragic results.

Even though we can’t properly screen them for terrorist ties.

Sending her to Congress is just too dangerous.